Founded in 1799, this congregation wasn’t called Newark United Methodist Church then, and it didn’t have a large building on Main Street. It was referred to as “Meteer’s Meeting” and met either in local businessman Thomas Meteer’s house or the paper mill he operated beside White Clay Creek. 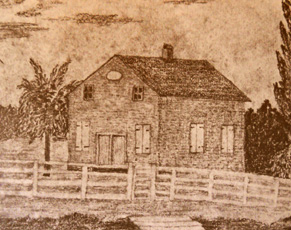 Methodism took root in Newark through the work of circuit riders who preached and visited Methodist societies in the late eighteenth century. Newark’s strategic location between Baltimore and Philadelphia made it a convenient stop for many itinerant preachers, resulting in the formation and nurture of Newark’s own Methodist society. In 1812 the society moved into its first building, Tyson’s Chapel (first referred to as “Wesley’s Chapel”), located on what is now called Chapel Street. It was here that renowned Methodist circuit rider preacher Francis Asbury (subject of the book American Saint) preached in 1913. By 1845 the church needed a new building and wanted to move onto Main Street, but the town was against it, saying that “the noisy Methodists had no right to disturb the peace and quiet of the citizens by holding their boisterous meetings on the main street.” (John Fletcher Williamson. “Recollections: The Peninsula Methodist,— —,” 1888.) The growing congregation bought a lot on Main Street in 1851 from an out-of-town owner unaware that no one in Newark would sell the Methodists land on Main Street. The sale took place at midnight, and building began the next morning “to the utter surprise and consternation of our enemies.” (Ibid.) Through years of war and peace, hardships and prosperity, the congregation stayed rooted on Main Street, rebuilding after a fire in 1861, and adding additions as the congregation and its needs grew. During the depression, a building loan was repaid through the dedicated efforts of the Ladies Aide and other women’s groups who used the church’s then-new kitchen to prepare many church suppers, sell gallons of soup to the community, and become famous for their “Methodist rolls.” The carillon has played hymns from the steeple three times a day since 1953. The Wesley Foundation Campus Ministry of the University of Delaware has been at home here since 1948. 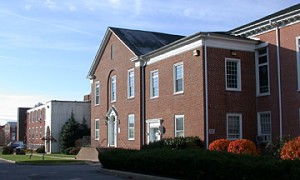 In the 1960s, a major “education wing” was added to the back of the church. Near the end of the twentieth century, the congregation was faced with a need for more capital improvements and considered the possibility of relocating by building a new facility in the suburbs. Citing its vital role in ministry in the heart of Newark, however, in the late 1980s the congregation voted overwhelmingly to remain in its historical location. Soon after that, accessibility for persons with physical disabilities was accomplished by adding a new side entrance and elevator to the main portion of our building.

In 1999 we celebrated our 200th anniversary as a congregation here in Newark. Among the special events honoring our bicentennial was a visit from our ecclesial leader at the time, Bishop Peter D. Weaver, who gave a stirring sermon linking the pioneers of our denomination with us and the future of our church. Our bicentennial year began with a Wesley Heritage Covenant Worship Service. Other special events included “Sweet Singer” (a musical about Charles Wesley) and a 200th Anniversary Pot-Luck Luncheon. To conclude this special celebration, Newark United Methodist Church hosted a Community Thanksgiving Service. Today, our congregation continues to make a difference in the lives of people locally, regionally, and globally. Come visit us and get involved!

Sign Up for Emails!
We use cookies on our website to give you the most relevant experience by remembering your preferences and repeat visits. By clicking “Accept All”, you consent to the use of ALL the cookies. However, you may visit "Cookie Settings" to provide a controlled consent.
Cookie SettingsAccept All
Manage consent

This website uses cookies to improve your experience while you navigate through the website. Out of these, the cookies that are categorized as necessary are stored on your browser as they are essential for the working of basic functionalities of the website. We also use third-party cookies that help us analyze and understand how you use this website. These cookies will be stored in your browser only with your consent. You also have the option to opt-out of these cookies. But opting out of some of these cookies may affect your browsing experience.
Necessary Always Enabled
Necessary cookies are absolutely essential for the website to function properly. These cookies ensure basic functionalities and security features of the website, anonymously.
Functional
Functional cookies help to perform certain functionalities like sharing the content of the website on social media platforms, collect feedbacks, and other third-party features.
Performance
Performance cookies are used to understand and analyze the key performance indexes of the website which helps in delivering a better user experience for the visitors.
Analytics
Analytical cookies are used to understand how visitors interact with the website. These cookies help provide information on metrics the number of visitors, bounce rate, traffic source, etc.
Advertisement
Advertisement cookies are used to provide visitors with relevant ads and marketing campaigns. These cookies track visitors across websites and collect information to provide customized ads.
Others
Other uncategorized cookies are those that are being analyzed and have not been classified into a category as yet.
SAVE & ACCEPT